A guide to the well-lived life. Reads like Brainpickings for the home, covering everything from relationships and culture to our place in the natural world.
ISABEL ALLENDEHOUSE OF THE SPIRITS
Explores our longing for sanctuary, considering everything from climate migration and new work patterns to our mythology of home. A treasure trove of journalism, art, and storytelling.
JEAN SHINODA BOLENGODDESSES IN EVERYWOMAN
Considers ancient traditions of honoring the hearth and modern challenges of rootlessness, lack of time, and loss of place. A meditation on our sense of longing and belonging---and our search of home wherever we can find it.
PHIL COUSINEAUSOUL: AN ARCHAEOLOGY, THE BOOK OF ROADS
Previous
Next 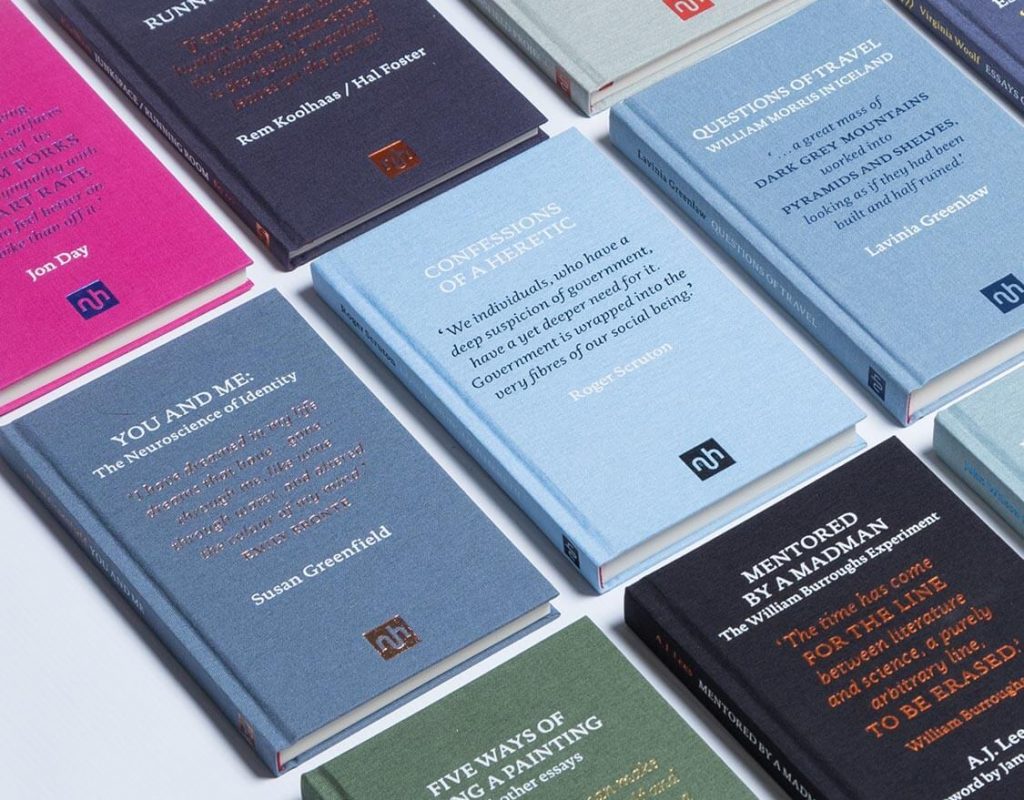 “The essay thinks, and while it thinks it seethes, it bristles, it adventures.”    Brian Dillon

The test of a great essayist—from Montaigne to Mark Twain, from Emerson to Virginia Woolf—is the ability to entertain a steady procession of ideas, some of them inflammatory, some entertaining, some downright contradictory, before deciding which will play a central role.

As Emerson notes, “The best part…of every mind is not that which (the writer) knows, but that which hovers in gleams, suggestions, tantalizing unpossessed before him. His firm recorded knowledge soon loses all interest for him, but this dancing chorus of thoughts and hopes is the quarry of his future, is his possibility.”

The term ‘essay’ refers to a trial, a search for understanding.  The form is open-minded, often daring and unconventional.  It dallies, reconsiders, and ruminates, and in the course of a few pages, moves from paradox to unity.

In 2011, entrepreneur Tom Kremer founded Notting Hill Editions (NHE) to revive the essay as a popular, and commercially viable, form.  It was valuable, he said, because it reflected the way writers naturally think, and was therefore key to the creative process.

Born in Transylvania in 1930, Kremer was interned with his family at Bergen Belsen. After liberation, he joined Israel’s fight for independence and worked on a kibbutz. Hungry for ideas, he read science, philosophy, and literature at Witwaterswand University in South Africa, Edinburgh University, and the Sorbonne. Eventually, he made his home in London, where he became known as a game inventor and the popularizer of  Rubik’s Cube.

With the profits from his business, Kremer started NHE and then established the Hazlitt Prize for the best essay written in the English language.  The award is named  for William Hazlitt, the 19th century master of the miscellaneous essay.   In its inaugural year (2013),  first place went to the Canadian philosopher Michael Ignatieff for his work on Raphael Lemkin, the Russian-born Jewish lawyer who coined the word genocide during the Second World War.  Also honored were Andrew O’Hagan (Light Entertainment) and Leslie Jamison (The Empathy Exams).

NHE is a beautiful anomaly.  The company publishes about six titles annually, each rendered with great care. The volumes are limited editions, uniform in design, and brief enough to be read in one or two sittings. Recent offerings include poet Joe Brainard’s classic essay, I Remember, on the nature of home and identity;  critic John Berger’s three illustrated meditations (On Time, Smoke, and Cataracts); architect Rem Koolhass’s Junkspace with Running Room, about the future of architecture and big cities; and Emily Rapp Black’s  Frida Kahlo and My Left Leg, a personal account of the daily challenges faced by amputees.  (Rapp Black and Berger are pictured below.)

Reviewers recently praised two other collections, edited by Duncan Minshall, on walking as an aid to self-discovery.  Sauntering features sixty writers, classic and contemporary, who tour Europe by foot.  (Henriette D’Angeville ascends Mont Blanc; Nellie Bly roams the trenches of war-torn Poland; Werner Herzog walks across Germany on a personal pilgrimage.)  Beneath My Feet: Writers on Walking contains literary perambulations from Petrarch, Rousseau, Kierkegaard and Mark Twain to Will Self and Rebecca Solnit, showing that as we move our bodies, we exercise the mind and expand the soul.

In the essay, the personal also meets the political,  illustrating how an individual struggles to adjust to the tenor of the times.  NHE honors this tradition with Drawn from Life: The Selected Essays of Michel de Montaigne.  Montaigne began writing as a way to cope with the horrors of civil and religious wars, and to mourn the loss of his best friend, the philosopher Étienne de La Boétie.  He produced 107 entries on the topics of education, love, the body, death, politics, and the colonization of the New World, allowing his pen to wander from one topic to another:

I cannot keep my subject still.  It goes along befuddled and staggering, with a natural drunkenness.  I take it in this condition, just as it is at the moment I give my attention to it.  I do not portray being: I portray passing….  I may presently change, not only by chance, but also by intention.  This is a record of various and changeable occurrences, and of irresolute and, when it so befalls, contradictory ideas: whether I am different myself, or whether I take hold of my subjects in different circumstances and aspects.

Montaigne wrote in search of that elusive and ever re-forming thing we call the Self, the part of us that is essentially, archetypally, human.  He was interested in the never-ending quest to know oneself and find one’s place in the world at large. That’s why his essays feel so modern.

NHE has also published such celebrated stylists as Oscar Wilde, J.B. Priestly, Fyodor Dostoevsky, Virginia Woolf, Osip Mandelstam, George Perec, and Philip Lopate.  Yet there are some wonderful surprises on their list as well.  In Happy Half-Hours A.A. Milne considers the rewards of doing nothing; in How Shostakovich Changed My Mind,  BBC critic Stephen Johnson explores the healing power of music; and in Confessions of a Heretic, social critic Roger Scruton explores the demise of friendship in the age of social media. There’s enough variety here to support an ongoing book club or cultural salon.

After Tom Kremer died in 2017, his daughter, Kim, took over as NHE’s managing director, partnering with nyrb: New York Review Books to bring these titles to an American audience.  She remains committed to her father’s vision—creating a library of essays that will preserve our cultural legacy and satisfy inquiring minds.

What new themes can we look forward to in the coming year?

On Cats: An Anthology, introduced by Margaret Atwood, will be released by NHE this fall, followed by three books that explore the boundaries between psychology and medicine.

The Wrong Turning: Encounters with Ghosts, introduced and edited by Stephen Johnson, is an unusual curated anthology of ghost stories focusing on their psychological meaning. Johnson argues that such tales speak to us of our own inner demons and can be useful in understanding mental illness.

In Midlife: Humanity’s Secret Weapon by psychiatrist Andrew Jamieson considers the evolutionary importance of the midlife crisis.   In Brainspotting: Adventures in Neurology by A.J. Lees  describes the lost art of listening, seeing, and trusting instinct when evaluating patients.

In an age where content is often truncated and oversimplified, Kremer and NHE’s publisher, Rosalind Porter (formerly deputy editor of Granta) offer something highly unusual—depth, wonder, and complexity in manageable bites.

While the essay has long been a mainstay in university education, NHE has shown that it has a broader role to play—as the best means of reaching for the truth of an idea.  Tom Kremer was right:  The essay is worth saving because it helps us hone our sense of meaning and confront the challenges of daily life.

Today fewer than half of all Americans read literature, and the number interested in books of any kind has decreased by seven percent over the last ten years.  What are we losing in the process? The ability to empathize and put ourselves in another’s shoes. Keith Oatley, a novelist and professor emeritus of cognitive psychology at the University of Toronto, has found a strong link between devouring fiction and doing well on tests of empathy and social awareness.  A host of other studies confirm that reading helps us understand the world beyond our doorsteps.

In Virginia Woolf’s Essays on the Self, introduced by Joanna Kavenna (Notting Hill Editions, 2014), there is a superb entry on the benefits of reading.  Entering the atmosphere of a novel, Woolf says, requires suspending our own attitudes and beliefs, and entering the lives of the characters.  Through the imagination, we come to understand those whose values and experience differ from our own:

Most commonly we come to books with blurred and divided minds, asking of fiction that it shall be true, of poetry that it shall be false, of biography that it shall be flattering, of history that it shall enforce our own prejudices.  If we could banish all such preconceptions when we read, that would be an admirable beginning. Do not dictate to your author; try to become him.  Be his fellow-work and accomplice. If you hang back, and reserve and criticize at first, you are preventing yourself from getting the fullest possible value from what you read.  But if you open your mind as widely as possible, then signs and hints of almost imperceptible fineness, from the twists and turns of the first sentences, will bring you into the presence of a human being unlike any other.

Woolf then goes one step further—encouraging us to experiment, putting our own recollections down on paper, so we can fully appreciate the writer’s craft.

Perhaps the quickest way to understand the elements of what a novelist is doing is not to read, but to write; to make your own experiment with the dangers and difficulties of words.  Recall, then, some event that has left a distinct impression on you—how, at the corner of the street, perhaps, you passed two people talking. A tree shook; an electric light danced; the tone of the talk was comic, but also tragic; a whole vision, an entire conception, seemed contained in that moment.

But when you attempt to reconstruct it in words, you will find that it breaks into a thousand conflicting impressions.  Some must be subdued, others emphasized; in the process you will lose, probably, all grasp upon the emotion itself.  Then turn from your blurred and littered pages to the opening pages of some great novelist —Defoe, Jane Austen, Hardy.  Now you will be better able to appreciate their mastery.

Woolf concludes that reading is a muscular act—a vigorous exercise of the brain and senses.

To read a novel is a difficult and complex art.  You must be capable not only of great fineness of perception, but of great boldness of imagination if you are going to make use of all that the novelist—the great artist—gives you.

American readers can purchase the full collection of essays from Notting Hill Editions through nyrb, New York Review Books.  Those living across the Atlantic can order directly from Notting Hill in London, or from their favorite bookshops.  Readers can also sign up for a monthly selection.

The NHE Essay library (from John Ruskin to Roland Barthes, Hannah Arendt to Rebecca West) is both an invaluable reference tool–and a wonderful place to browse.  You can find it here.